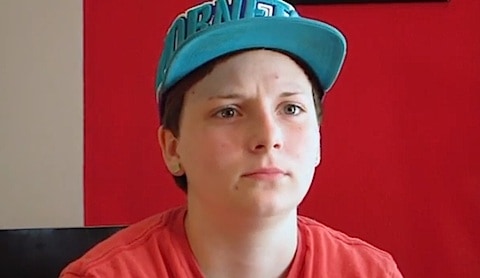 The Southern Poverty Law Center has filed a lawsuit on behalf of Destin Holmes, a student who was bullied and harassed by teachers and students at Magnolia Junior High and Moss Point High School in Moss Point, Mississippi, Gulf Live reports.

The harassment is disgusting:

In March, Holmes said she was in her Magnolia Junior High math class last year when she experienced one of her worst cases of bullying, and it was initiated by a teacher.

The teacher had divided the class into 2 teams — boys versus girls — for a trivia game, Holmes said, but she called on the tomboy-looking teen to sit alone in the middle because she was an "in-between it."

Now at Moss Point High School, Holmes said the students are a little more accepting, but she still has trouble with staff.

In one instance, a substitute teacher wrote her up for not following directions, and the written referral called her "he." Holmes said the substitute knew she was female.

SPLC says the school district has chosen to ignore the situation:

The federal lawsuit — filed in Gulfport this morning — is being brought to enforce equal protection of lesbian, gay, bisexual and transgender students, the organization said, as well as students perceived as LGBT.

The filing is the next step in the case of 17-year-old Destin Holmes, a lesbian student who stood with the SPLC in March and said she was consistently harassed because of her sexual orientation and because she dressed in hats and masculine clothes. The harassment came from administrators, teachers and students, said Anjali Nair, a staff attorney with Southern Poverty Law Center.

After that March news conference, the SPLC said it would try to reach an agreement with the district to change the bullying environment, but Nair said an agreement was not reached.

Watch Holmes talk about her experience being bullied, AFTER THE JUMP…

Here is SPLC's page on the case with much more information.