Elton John explained why he went to Russia in a statement posted today to the Elton John AIDS Foundation website: 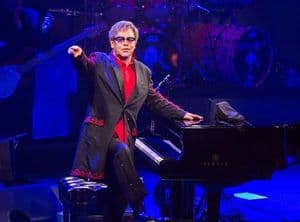 There was a lot of speculation about whether I would go to Russia this year. Many people outside the country thought I should boycott Russia because of its new homophobic legislation. Others said I must go to challenge the government.

I decided in the end to be guided by what Russian people wanted me to do. The message, from even the most marginalised Russian groups we work with at the Elton John AIDS Foundation, was ‘please come’. If you don’t come, AIDS workers and LGBT activists told us, we will feel isolated. We will miss having your voice in our debate. It might be interpreted that you don’t care. Or we may be blamed for keeping you away.

In Moscow I spent hours with gay activists, Federal doctors, human rights lawyers and people living with HIV. They told me that since the new legislation has been adopted it’s getting harder and harder to deliver basic HIV information or healthcare to gay men for fear of seeming to ‘promote’ homosexuality, which is against the law. Gay people lie even to their children about their sexuality, in case it jeopardises their families.

That night at my concert I made a statement, directly to the audience, about how sad, shocking and isolating this new law seemed to be. A young woman with a rainbow banner cheered. I realised then, with thousands of Russians cheering for a man they knew to be gay, that I had made the right decision. I believe the Russian people are decent and will be persuaded – but they need to hear us, and see we are human. They can’t do that from a distance of two thousand miles.

A number of celebrities have recently declined to go to Russia, some for fear that it is unsafe. But I say to my friends – we all owe our freedoms to people who took risks with their safety for us, and faced far greater dangers than those confronting a Western artist in Russia. Freedom is worth taking a risk for. Saving people from HIV is worth taking a risk for, and there is nothing that fuels the AIDS epidemic more effectively than stigma and isolation. We’ve learnt that over 20 years of funding HIV programmes around the world, including Russia.

As the Winter Olympics approaches, I know lots of sportsmen and artists are facing the same choice that I faced. I realise not everyone will share my view. But personally I hope and pray that prominent people will go to Russia and challenge the wrong thinking of this law. It breeds isolation, mistrust and hate, and cannot be how Russia wants to be known by the world.

Thank you to everyone who came to my concerts. And thank you to the people who gave their time to talk to me about HIV and gay rights while I was in Russia. We will continue to support your important, life saving work.“

If you missed the video of Elton John speaking out from the stage in Moscow, you can watch it HERE.