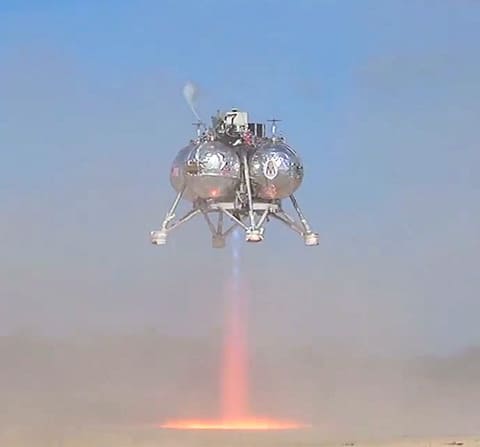 NASA's Morpheus lander, which crashed and burned back in August of 2012 and has been outshone by the similar vertical Grasshopper from Elon Musk's space corporation SpaceX, completed its first successful test flight this week at Kennedy Space Center.

The 54-second test began with the Morpheus lander launching from the ground over a flame trench and ascending approximately 50 feet, then hovering for about 15 seconds. The lander then flew forward and landed on its pad about 23 feet from the launch point.

Project Morpheus integrates NASA's automated landing and hazard avoidance technology (ALHAT) with an engine that runs on liquid oxygen and methane, or "green" propellants, into a fully operational lander that could deliver cargo to asteroids and other planetary surfaces. Morpheus and ALHAT are examples of the partnerships that exist within the agency since seven of the 10 NASA centers have contributed time, energy and resources to both.

Valkyrie's two cannon-like arms are interchangeable, and its legs are designed to walk over rough, uneven terrain. It's equipped with cameras on its head, body, forearms, knees, and feet, not to mention with additional LIDAR and sonar units. While it operates via remote right now, the ultimate goal is to make Valkyrie as autonomous as possible. It's hard not to see that glowing circle in the center of its chest and not think about Iron Man.

Watch the lander and the robot in action, AFTER THE JUMP… 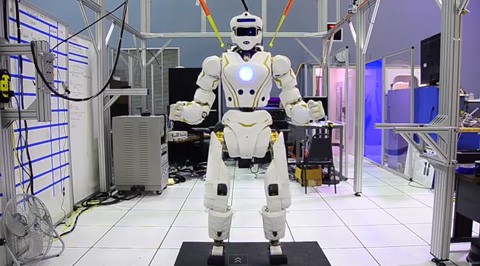 Previous Post: « Russia to Create ‘Protest Zones’ for Sochi Olympic Games
Next Post: Elton John Explains Why He Went to Russia and Spoke Out for Gays, Urges Others to Do the Same »