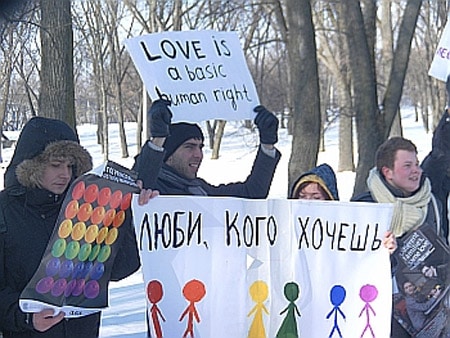 The GayBelarus national youth civic association condemned the ban, saying that the unwillingness by authorities to discuss different formats and times for the events "constitutes deliberate contempt of civil and political rights and freedoms."

Belarus activists held their first LGBT rally ever back in 2011 but at the time were ordered by authorities not to display the rainbow flag. They got around that order by using the rainbow in other elements of their signage (above).

In 2010, riot police put a violent end to an LGBT rights rally.

Previous Post: « First Gay Marriage Announcement Made at U.S. Coast Guard Academy
Next Post: Pat Robertson: Don’t Invite Lesbians to Your Home Because They Might Convert Your Kids — VIDEO »