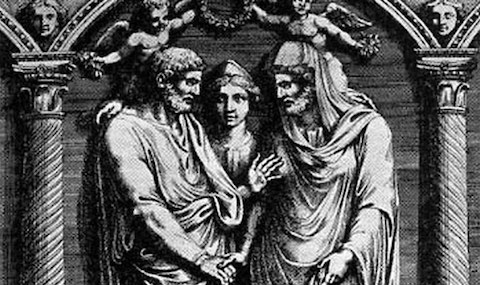 When gay marriage started coming to the forefront of the gay rights movement, social conservatives began screaming about the preservation and sanctity of "traditional" marriage – that is, one man and one woman for the purpose of procreation. Approximately 5 minutes later, rational people pointed out that the definition of what marriage is has changed radically over the generations. Now, various historians and scholars are chiming in to confirm that, yes, marriage has evolved to meet the needs and ethics of society.

Far from viewing marriage as immutable, courts and legislatures altered marriage fundamentally in order to take account of societal needs and spouses’ evolving relationships within their households and in the larger society[…]Many features of modern marriage that we take for granted today — such as the ability of both spouses to act as individuals, to marry someone of another race, or to divorce for numerous reasons — were fiercely resisted as they were coming into being, and were viewed by opponents as threatening to destroy the institution of marriage itself.

Indeed, the only traditional feature of marriage that has been observed is its enduring elasticity, which has allowed it to change to meet the needs of any given society.