Michigan Governor Rick Snyder, who is an expert dodger at questions on LGBT rights and has, in the past year refused to address the will of the people on anti-discrimination laws or marriage equality, said he would be open to addressing the former with the right partner, MLive reports: 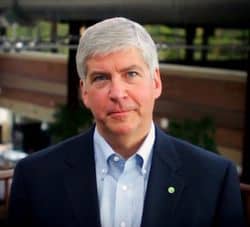 The Republican governor, sitting down with MLive last week for a year-end interview, said he is willing to participate in talks about the Elliott-Larsen Civil Rights Act but does not plan to lead them.

"I'll wait for, most likely, a signal from the Legislature to say they're open to having that discussion," said Snyder, who generally avoids controversial social issues. "There is some openness likely there. I think the speaker has made some comments along those lines. I'm willing to have that dialogue, but I need a partner to have it with."

Speaker Jase Bolger (R-Marshall) has been talking "behind the scenes" about updating Michigan civil rights statutes to include anti-discrimination protections for gay residents but is reportedly concerned about religious exemptions:

"Should a devout religious person who owns a small business be forced by the government to violate their religious beliefs and hire someone or provide services to someone who is leading a lifestyle that they cannot embrace because of their religious teachings?" [Bloger's spokesman] said in an email. "That, counter balanced with an individual's right to personal liberty and being able to live freely and openly, is where the struggle lies."

The conversation with Snyder came out after being asked about Michigan RNC Committeeman Dave Agema's most recent homophobic remarks, that gays falsely claim people with AIDS as their lovers in order to receive free health benefits, remarks that Snyder says are "discriminatory" and, according to MLive, have "no place in any political party."