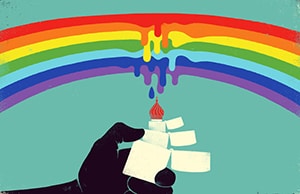 An op-ed in Friday's New York Times by author and journalist Mark Gevisser examines the impact of Russia's anti-gay propaganda law for its LGBT community. Gevisser takes the Russian port city of Arkhangelsk (population 350,000) as a case study of sorts to consider the effect of the law on everyday Russians and also to attempt to suss out the root cause of homophobia in Russia:

Yet one often ignored cause for this homophobic surge is perhaps the most obvious: backlash. Whatever else it is, Russian homophobia is a direct, even violent, reaction to the space created by a minority that has only come into the open over the last decade.

This is certainly the case in Arkhangelsk, where Rakurs [the city’s lesbian, gay, bisexual and transgender advocacy organization] was denied registration as a nonprofit organization in 2010 on the grounds that it promoted “extremism.” Rakurs managed to get this judgment overturned, but soon after, the “gay propaganda” ban was passed.

“The law was clearly designed to limit our activities,” Tatiana Vinnichenko, the director of Rakurs, told me. “And in many ways it has succeeded. We cannot hold protests of more than one person. And any attempts to help young people are stifled.”

Still, despite the encroachment on their rights, young "LGBTs" ("the acronym has become part of the Russian vernacular") are not giving up the fight. In fact, Gevisser suggests that the focus on the LGBT community, even in a negative light, has galvanized many who might otherwise have been silent or inactive:

Even as the rise of a queer rights movement provokes a backlash, the backlash undermines itself — by strengthening the resolve of the movement and by publicizing (even if through hate) the existence of a group of people who were so long invisible…

There is only one way out of this bind: for Russians themselves to speak out in support of the rights of sexual minorities. What is most inspiring about groups like Rakurs, in far-flung communities like Arkhangelsk, is the counterpoint they give, by their very existence, to the official narrative that homosexuals are dangerous outsiders or, worse, child molesters.

In Arkhangelsk, [a 22-year-old bus conductor named] Varya and her friends have graduated from the alt-music scene. “We’re adults now,” she said. “We have kids, we have jobs.”

She held up the hateful sticker she had found on the bus [that reads, "Stamp out faggots"), and kept: “And we have this to fight.”