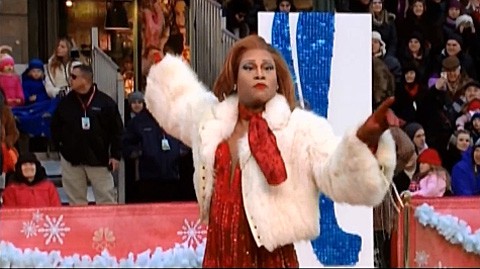 American Family Association sub-project One Million Moms sent out an action alert to its members today, urging them to voice their disapproval over the fact that Tony Award-winning musical Kinky Boots was allowed to perform in the Macy's Thanksgiving Day Parade, Right Wing Watch reports.

As a parent and a member of OneMillionMoms.com, I am greatly disappointed in your company's choice to include the "Raise You Up" drag performance during your Thanksgiving Day Parade with millions of children present and watching from home. It is inappropriate to highlight cross-dressing in a sexually charged performance during a traditional family activity. Your blatant agenda and in-your-face message was quite offensive, and Macy's cannot be trusted. Shame on Macy's for promoting this behavior.

It is clear that Macy's does not have my children's best interest in mind. I can no longer trust Macy's Dept. Store. Your company needs to know that trust must be earned and once trust is lost it is difficult to get back.

Your decision was irresponsible, especially at an event when families are watching together. Nothing about this particular performance was family-friendly. The ENTIRE parade should be kid-friendly; not 95% of it! Your company can do better than this.

As Matt Lauer noted in his introduction of the musical, it's about learning to celebrate the differences in each other.

Watch the Kinky Boots performance, AFTER THE JUMP…