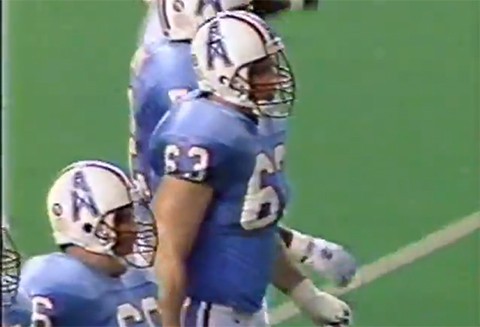 NFL team the Houston Oilers, now known as the Tennesse Titans, had a notoriously tumultuous year in 1993, according to a recent NFL Network documentary. However, what may surprise some is what did not seem to contribute to the team's woes that year: the presence of two gay players in the locker-room whom most, if not all, of the team knew to be gay. The Houston Chronicle reports:

“Listen, those guys that we’re talking about were unbelievable teammates. And if you wanted to go to war with someone, you would get those guys first. Because I have never seen tougher guys than those guys,” said Pro Bowl linebacker Lamar Lathon, who starred at the University of Houston. “And everybody in the locker room, the consensus knew or had an idea that things were not exactly right. But guess what? When they strapped the pads on and got on the field, man, we were going to war with these guys because they were unbelievable.” […]

[Players] insisted the ’93 Oilers were much more of an inclusive family than most have ever given them credit for.

“I really enjoyed playing on that team, to be honest with you,” five-time Pro Bowl defensive end Ray Childress said.

To prove how united they were in the face of constant adversity, players confirmed a rumor hinted at during the peak of a turmoil-filled era defined by The Choke and The Punch.

“Everybody knew certain guys (were gay). Everybody speculated and people used to see these two guys come in by themselves. They’d leave at lunchtime and then come back,” Bubba McDowell said.

McDowell echoed Lathon’s thoughts, saying the gay players were highly valued on the field and showering with them in the locker room was “no big deal.”