During a Tuesday radio interview, anti-gay bigot Bob Vander Plaats (pictured) — founder of the oddly capitalized "pro-family" organization The FAMiLY LEADER — said that the recent court ruling decriminalizing polygamy in Utah is the result of recent marriage equality court victories and will ultimately lead to "parents marrying their adult children for tax purposes." 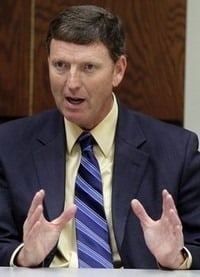 Plaats joins other anti-gay conservatives — like Rick Santorum, Bill O'Reilly, the so-called the National Organization for Marriage, Focus on the Family and the hate group the Family Research Council — in repeating the long-held claim that marriage equality will lead to legalized polygamy. But Plaats goes a step further by connecting same-sex marriage to eventual child-adult marriage (though he stops short of saying that such a relationship would involve sex).

Keep in mind, this is a man who considers homosexuality a public health risk like smoking, laughs at "faggot jokes" and asked all the 2012 GOP presidential candidates to sign a pledge declaring that black families were stronger under slavery.

However, Zack Ford from Think Progress explained why Vander Plaats' and his cronies' slippery slope thinking is bunk (in short because the polygamy defendants didn't want legal recognition of their polygamous marriage to begin with and because the previous court ruling that helped their case centered entirely around bedroom privacy of consenting adults, not children):

In a sense, it’s true that a victory for gay rights led to this decision, but not because it was a victory for gay rights. The basic outcome of [Lawrence v. Texas, which overturned the country’s so-called “sodomy laws” criminalizing same-sex relations] is that the government cannot intrude on what happens in adults’ bedrooms so long as it’s consensual; it just so happens that the same principle can apply to the multiple marriages some Mormons have or that plenty of people from other faiths have practiced since the Old Testament.

But this victory for polygamy is not likely to even impact the LGBT community. Brown and his wives seemingly identify as heterosexual; the term “sister wives” specifically connotes that the wives do not have sexual relationships with each other. It is not people with same-sex orientations who are vying for polygamy.

More importantly, this case reinforces the distinction between legal marriage and religious marriage that is often lost in debates. The LGBT equality movement is not particularly interested in forcing any religious organization to bless same-sex marriages, but is focused on achieving equal protection under the law for same-sex families. Conversely, polygamists are not currently fighting for legal recognition, but for the right to freely practice their religious beliefs without facing criminal prosecution.

You can hear Vander Plaats' radio interview clip AFTER THE JUMP…