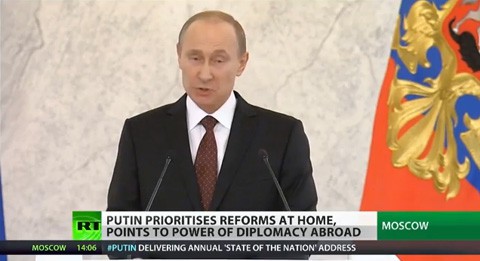 As part of a wide-ranging speech to both houses of Parliament, Russian President Vladimir Putin defended the country's bans on 'gay propaganda' and portrayed Russia as "a force for peace and morality" according to the Guardian:

In an apparent reference to the laws banning "propaganda of non-traditional relations", the Russian president said that on the international arena Russia sees itself as a defender of conservative values against what it is considers as an assault of "genderless and fruitless so-called tolerance" which he said "equals good and evil".

He said Russia will oppose attempts to impose foreign political ideology on sovereign countries. Such attempts, Putin stressed, often lead to destruction and bloodshed, citing events in the Middle East and North Africa as an example.

The state-run network RT's report on the address with excerpts, AFTER THE JUMP…