Although Alan Turing — the famous British World War II codebreaker who helped thwart the Nazis and was later prosecuted for being gay — recently received a royal pardon for "gross indecency," British gay activist Peter Tatchell wants an inquiry into Turing's death, as he suspects that Turing may have been murdered by British security services rather than committed suicide as previously thought. 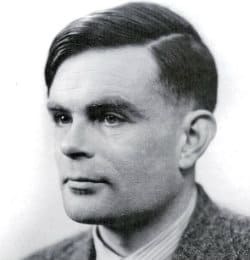 After what Tatchell calls a "perfunctory and inadequate" inquest of Turing's death, Turing's cause of death was reportedly self-poisoning through ingestion of a cyanide-laced apple.

However, Tatchell says that during the homophobic and xenophobic political atmosphere of the 1950s "the security services would have been very fearful that Turing [and his gay life were] vulnerable to blackmail and anxious that he might pass information [regarding his 'expert knowledge of code breaking, advanced mathematics and computer science'] to the Soviets."

Tatchell adds that, "Although there is no evidence that Turing was murdered by state agents, the fact that this possibility has never been investigated is a major failing… A new inquiry is long overdue, even if only to dispel any doubts about the true cause of his death.”

Turing's punishment for "gross indecency" was to undergo chemical castration to diminish his sex drive — a hormone therapy that rendered him impotent and caused him to develop breasts. Nevertheless, Express.co.uk reports, "There was nothing in Turing’s final days to suggest he was in despair. He had left a note on his office desk the Friday before he died reminding himself of tasks to be done after the weekend."

Turing has experienced a recent resurgence in popularity. In addition to the royal pardon, the famed cryptoanalyst has also received a statue of himself in Paddington, London; an upcoming movie about his life as well as a petition to get him on the £10 note.