The 9th Circuit Court of Appeals has ruled that lawyers cannot exclude potential jurors from a jury because they are gay, Buzzfeed reports: 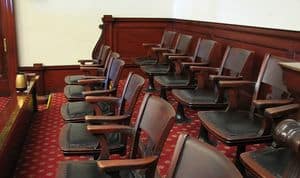 The 9th Circuit Court of Appeals, in a unanimous decision, held that discrimination based on sexual orientation is subject to heightened scrutiny — a decision the court concluded has been made in action, though not in word, by the Supreme Court itself.

The case may not initially strike us as the stuff of social justice: two multibillion dollar companies fighting over potentially hundreds of millions of dollars in revenue while paying multimillion dollar law firms millions of dollars to do it. But in the blink of an eye, the lawyers went from talking about "unfair competition" to talking about "antigay discrimination."

The case revolves around the price of an HIV drug and whether one company's decision to quadruple the drug's price violates unfair competition laws. At jury selection time, one of the attorneys used his right to exclude certain members from the jury pool to, ostensibly, exclude a gay person. We don't know for sure that this is what happened; these are allegations and proof is always hard to come by in these circumstances. But if the allegations are true, the act is troubling, at best: the lawyer was suggesting that a gay person cannot be impartial in a case involving an AIDS drug.

The case now asks: Can a person be excluded from a jury simply because of his or her sexual orientation?