Maryland's Attorney General Douglas Gansler says the state will recognize same-sex marriages performed in Utah before the Supreme Court stay on a lower court ruling striking down the state's ban, the WaPo reports: 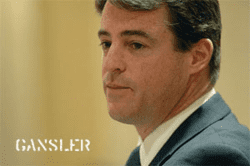 The Human Rights Campaign has been seeking assurances that the marriages in Utah would be recognized in states such as Maryland, where gay nuptials are allowed.

“If any of them were to move to Maryland, we would recognize those marriages as being valid,” Gansler said in an interview Friday afternoon.

In a letter to Chad Griffin, president of the Human Rights Campaign, Gansler, who is running for governor, said “we are witnessing a historic change in how the American people regard same-sex marriage.”

“Maryland has been on the forefront of this change since 2010, when I issued my opinion concluding that same-sex marriages that are valid in the state in which they were performed would be recognized as valid here in Maryland,” Gansler wrote.