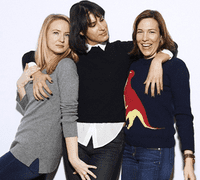 Though the film's broader dramatic concern is Shirin's post-breakup tailspin some of the strongest and funniest scenes are flashbacks to her failed relationship. Though Maxine and Shirin are on opposite sides of the coming out process one of the best scenes is their escalating mocking riff on the anti-gay vernacular "nohomo!" used to prove that the person talking is not gay no matter what they're saying or doing…

"I like the taste of your dick in my mouth – no homo!"

The comedy is so well written and engagingly acted that it won't even alienate anyone who finds Hip Lesbian Brooklyn as "exotic" as Shirin condescendingly assumes her girlfriend will find her own Persian immigrant community.

Remarkably Appropriate Behavior doesn't feel like a vanity project despite Akhavan's multi-tasking and Shirin's arguable narcissistic personality disorder. (Shirin at least would argue that she doesn't have one). Instead it feels like a complete and singular movie, and a gift for anyone who mourns the death of romantic comedies in particular. The Romantic Comedy genre, like Shirin, has been in its own tailspin. Blame its slow death on awful negative gender stereotyping (the gay community isn't the only community damaged by stereotyping) and the simple fact that most of them forget to be both romantic and funny and opt for some halfhearted stab at one or the other. If they're not both, they're failing. (In a merciful twist of fate, comedies need not be about successful relationships to be romantic. Just ask Woody Allen's 70s masterpieces.) Shirin and Maxine's flashback meet-cute scene on the steps of a brownstone is one of the funniest and most flirtatious I've ever seen in the genre, gay or straight or any point between on the spectrum of sexuality. The jokes, while funny on their own, are steeped in character detail -you can see the seeds of the eventual breakup right then and there but you still want to go straight to bed with it.

Meanwhile, on the dramatic side of gay cinema, Ira Sachs' LOVE IS STRANGE is an absolute winner. It could even make a dent in the next awards season if it's handled well when it hits movie theaters. Sachs, an out gay filmmaker who both writes and directs, has received good to great notices in the past (particularly for the recent addiction drama Keep the Lights On which many critics loved but which I thought suffered from monotony and shapelessness) but there will be few contesting that Love is Strange isn't his finest film yet and a major leap forward.

Love is Strange opens with the wedding of senior citizens Ben (John Lithgow) and George (Alfred Molina, never better). We meet their network of friends (most notably Cheyenne Jackson and Manny Perez as gay cops that the old husbands affectionally refer to as "The Policewomen") and family (Darren Burrows, Marisa Tomei, and Charlie Tahan play Ben's relatives) but the shared nearly utopian happiness of the wedding is soon brushed off by harsh realities and then basic truths about cohabitation, advancing age, and dependence. Through a quick series of unfortunate and anger-inducing circumstances the couple, still deeply in love nearly 40 years on, are suddenly living separately  – George with the cops and Ben with his relatives. While their parallel stories of discomfort in their temporary homes are always interesting in and of themselves the film comes to such emotional and bittersweet life whenever the couple are reunited, that it keeps reinforcing the life-affirming and rarely dramatized truth that romantic love can grow and deepen with time (movies are always about the beginning of relationships) until it's just a part of who you are, as tangible and real as your own limbs.

Lithgow and Molina have great chemistry, never once feeling less than authentic or desexualized as elderly gay men with a forty-year history. Their lived in duet helps the film transcends the labels I've already placed on it here; it's a gay film, sure, but better than that it's a fully human one. Love is Strange has a lot more than just gay marriage with expansive ideas about aging, support networks and, brilliantly as it winds down, what the young gain from the old — concerns that can't be reduced by sexual labels.  It fully earned the copious tears and standing ovation that greeted its premiere here in Utah. 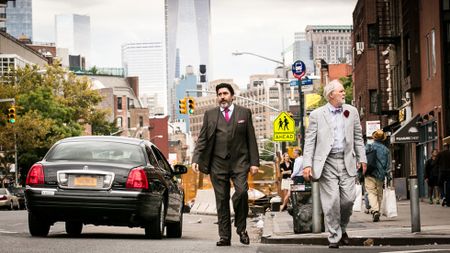