Several Russian MPs have submitted a measure to the State Duma which proposes an amendment to the ban on "gay propaganda" to minors by changing it, the Moscow Times reports: 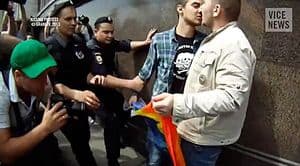 The rest of the law, including punishments that include up to 1 million ruble ($29,000) fines and 90 day suspensions for organizations which publicly promote homosexuality, would be left unchanged. Similar changes would be made to other laws on the protection of children.

The initiative, submitted by members of the ruling United Russia party along with Communists and Liberal Democrats, may be intended to nullify criticism of the anti-gay law which has drawn condemnation from Western countries and motivated gay activists to call for a boycott of the 2014 Winter Olympics in Sochi.

Notes to the bill cite a rise in sexual activity among Russian teens as a motivating factor for broadening the law's scope and say it aims to protect children from information "damaging to the values of family life, the spiritual and intellectual development of minors."