UN Secretary Ban Ki-Moon has released a statement through his spokesperson on the situation in Nigeria, where the arrests and torture of gay people have been reported following the signing of an anti-gay law by President Goodluck Jonathan. 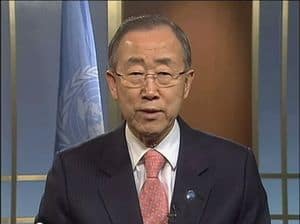 The Secretary-General shares the deep concern expressed yesterday by the High Commissioner for Human Rights, Navi Pillay, following the recent signing into law of the Same-Sex Marriage (Prohibition) Act in Nigeria. The law introduces a wide range of offences, in breach of fundamental human rights, including 14-year jail terms for same-sex couples who live together or attempt to solemnize their union with a ceremony. The Secretary-General fears that the law may fuel prejudice and violence, and notes with alarm reports that police in northern Nigeria have arrested individuals believed by the authorities to be homosexuals, and may even have tortured them.  As UNAIDS and the Global Fund noted in a statement yesterday, the law also risks obstructing effective responses to HIV/AIDS.

The Secretary-General reiterates that everyone is entitled to enjoy the same basic rights and live a life of worth and dignity without discrimination. This fundamental principle is embedded in the UN Charter and the Universal Declaration of Human Rights.

The Secretary-General strongly hopes that the constitutionality of the law can be reviewed. The United Nations stands ready to assist Nigeria in any way to bring about constructive dialogue and change on this matter.