Missouri all-American Michael Sam has received lots of support since coming out last night, but eight NFL executives and coaches (who don't have the courage to give their names) "project a significant drop in Sam's draft stock, a publicity circus and an NFL locker room culture not prepared to deal with an openly gay player" according to Sports Illustrated. 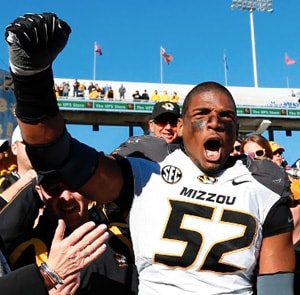 Or maybe it's just a couple of writers who wants to spin Sam's groundbreaking announcement into something negative. In any case, there's so much "gay panic" in this article it's nauseating.

"I don't think football is ready for [an openly gay player] just yet. In the coming decade or two, it's going to be acceptable, but at this point in time it's still a man's-man game. To call somebody a [gay slur] is still so commonplace. It'd chemically imbalance an NFL locker room and meeting room."

"You're going to have to have one confident general manager or head coach that is certainly entrenched in his position and established to draft a player like that It's one thing to have Chris Kluwe or Brendon Ayanbadejo, advocates for gay rights, on your team. It's another to have a current confirmed player."

"I just know with this going on this is going to drop him down. There's no question about it. It's human nature. Do you want to be the team to quote-unquote 'break that barrier?'"

"That will break a tie against that player. Every time. Unless he's Superman. Why? Not that they're against gay people. It's more that some players are going to look at you upside down. Every Tom, Dick and Harry in the media is going to show up, from Good Housekeeping to the Today show. A general manager is going to ask, 'Why are we going to do that to ourselves?'"

"There are guys in locker rooms that maturity-wise cannot handle it or deal with the thought of that. There's nothing more sensitive than the heartbeat of the locker room. If you knowingly bring someone in there with that sexual orientation, how are the other guys going to deal with it? It's going to be a big distraction. That's the reality. It shouldn't be, but it will be."

Yahoo Sports writer Charles Robinson pretty much sums up how revolting this kind of reaction is. Tweets Robinson: "Says a lot about the NFL when Michael Sam goes on the record as being a gay athlete but NFL general managers want anonymity to talk about it".