Figure skater Ashley Wagner has arrived in Sochi and indicated the irony with which she views the Sochi decorating scheme and says she won't tone down her criticism of the country's anti-gay laws, USA Today reports: 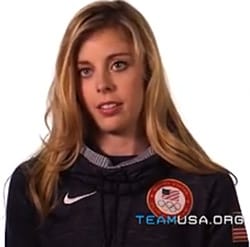 "It doesn't really matter where I am, it's still my opinion. It's a very colorful venue, though. I think it's funny," Wagner said, laughing, after she finished her practice.

Asked if she was referring to the Sochi Games' rainbow-colored logo, which is plastered everywhere, she said yes.

Wagner added that she is not going to be quiet if asked about the laws:

"I stand by what I've said before. I'm an athlete here at the games, there's only so much I can do," she said. "But I believe in equality for all. You're born with the right to be as equal as anyone else."

Wagner has been the most outspoken U.S. Olympic athlete when it comes to condemning Russia's anti-gay position.

Previous Post: « Drug Dealers Arrested in Connection with Philip Seymour Hoffman Death
Next Post: These are the 6 Openly Gay Athletes Competing at the Sochi Olympics »