HRC reports that over the course of the 2014 Winter Games in Sochi, "NBC has dedicated 1 hour, 59 minutes, 42 seconds across NBC, NBC Sports, MSNBC, CNBC and USA to discussing Russia’s anti-LGBT laws."

In total, 30% of coverage aired on NBC with 66% on MSNBC and just over 3% on CNBC.  On the final day of the Games, there were three mentions of Russia’s persecution of LGBT people, including an interview where host Bob Costas asks International Olympic Committee (IOC) president Thomas Bach whether the IOC might change its policies to specify that certain things have to be in order in a country before the Olympics would consider going there.  After Bach stated that it was not the job of the IOC to influence politics, Costas went on to question the IOC’s decision to punish any athlete who spoke out against Russia’s mistreatment of LGBT people during official Olympic proceedings. 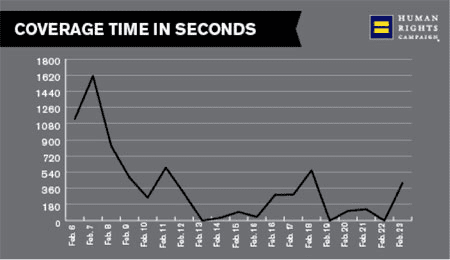