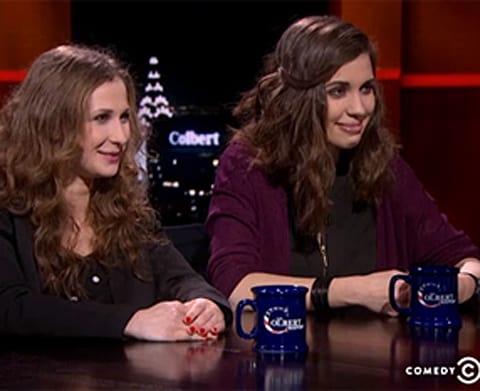 Two members of the Russian punk band Pussy Riot, who were jailed for nearly two years for staging a protest in a Russian church, may run for seats in the Moscow assembly, the AP reports:

Nadia Tolokonnikov, appearing alongside fellow band member Maria Alekhina at an event on the sidelines of the Berlin film festival Monday, said the move into politics "is worth a try." The election will most likely be held in September, although no exact date has been set.

Make sure not to miss their recent appearance on Colbert.

Previous Post: « Sport is For Everyone, No Matter What Team You Play For: VIDEO
Next Post: Protesters Demanding Hearing of LGBT Non-Discrimination Bill Arrested at Utah Governor’s Office »