Callan Chythlook-Sifsof, a U.S. snowboarder who missed the cut for Team USA, came out of the closet in an interview on Friday, ADN reports: 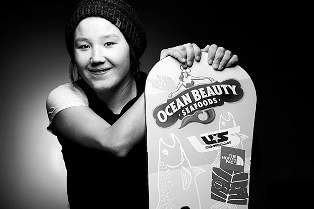 The 24-year-old told the ESPN news program "Outside the Lines" that she is gay, a revelation she said she wanted to make during the Sochi Olympics, where gay rights have become an issue because of Russia's anit-gay laws.

"I realized coming out publicly isn't just about yourself but it's also about realizing the greater scope of what's going on and becoming a voice against something," Chythlook-Sifsof said. "It's important to come out and take a stand and show the world that it's not OK to be a bigot."

Added Callan: "It's almost a blessing that the Olympics are happening in Russia and these issues are coming out. It gives the world a chance to view it and it gives athletes a chance to voice their opinions about it and to show every country in the world that this is not OK."

Previous Post: « At Weigh In, Boxers Take Matters into Their Own Hands: VIDEO
Next Post: ‘Morning Joe’ Talks Up the Topic of Michael Sam and Gays in the NFL: VIDEO »