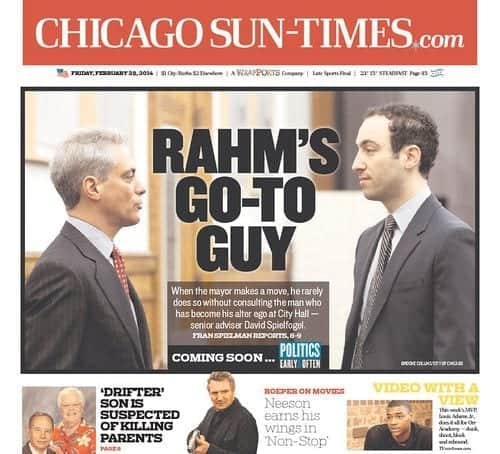 Spielfogel is not only the mayor’s intellectual match — without the ego to go with it — he’s the brains and execution behind virtually every one of the mayor’s policy initiatives, from ethics reform and ride-sharing to petcoke and the drive to raise $50 million over five years for jobs, mentoring and recreation programs for at-risk kids.

Emanuel rarely makes a move without consulting him.

“Since David joined my campaign in its first few weeks, he’s helped me to shape city hall’s agenda on every major priority. Our first discussion in 2010 was about a range of ways to break from the past and move this city forward . . . Whether on the campaign, or running my transition team, or now in city hall, I have come to value David’s opinions, insight, advice and focus,” Emanuel said via e-mail.

Spielfogel’s father, Keith, said about his son: “If I call, he doesn’t answer. If the mayor calls, he answers.”

Spielfogel also happens to be gay and Emanuel performed his civil union in 2011 at City Hall:

David Spielfogel is the most influential of a large number of openly gay employees in the Emanuel administration.

He had a girlfriend all through college “who I loved,” and he came out after graduation, because, “I’m not sure I knew” before then.

Although his own family was “very accepting,” Spielfogel said the fact that he’s gay gives him a unique and important perspective when it comes to making policy.

“It makes me more sensitive to the feeling among different groups that they’re not included in progress or don’t feel like they have a stake in decisions,” he said.

“Whether you’re gay, whether you’re a woman, whether you’re part of a minority group, there are times when you feel like your voice doesn’t want to be heard solely because of something that’s biological for you. There’s an extra sensitivity there.”

Previous Post: « Edmund White’s ‘Inside A Pearl: My Years In Paris’: Book Review
Next Post: Zimbabwe President Mugabe Just Learned There are Homosexuals in His Country, Backs Uganda’s Anti-Gay Law »