Four men accused of being gay have been publicly whipped in a Nigerian court in the northern state of Bauchi, the AP reports: 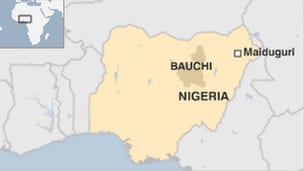 The four were among dozens caught in a wave of arrests after Nigeria strengthened its criminal penalties for homosexuality with the new Same Sex Marriage Prohibition Act in January.

The men could face further violence in prison if human rights organizations do not come up with an additional fine of 20,000 naira ($120) each meted out Thursday by a judge in Bauchi city, Dorothy Aken'Ova, convenor of the Coalition for the Defense of Sexual Rights Network, told The Associated Press. The four were sentenced to 15 strokes plus a year's imprisonment if they cannot pay the fine.

Aken'Ova said the men, aged between 20 and 22, should not have been convicted because their confessions were forced by law agents who beat them.

The men's families, embarrassed by the men, refused the offer of a lawyer in order to get the case over with, according to the AP:

On Thursday, the judge said he was lenient because the men had promised that the homosexual acts occurred in the past and that they had since changed their ways, according to Aken'Ova.

Previous Post: « Jon Stewart Talks to Rachel Maddow About ‘Why We Did It’, Her New Doc on the Iraq War: VIDEO
Next Post: Santa Fe Elects First Openly Gay Mayor »