As HIV becomes a more and more managable disease and the horror of the 80s AIDS epidemic slides further into history, younger gay men are treating the disease as a divisive stigma rather than a uniting issue, writes Peter Staley at the Huffington Post: 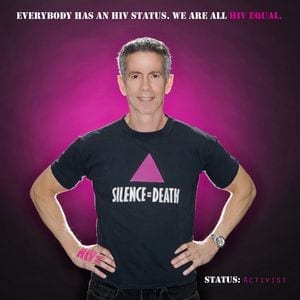 Here are salvos from a new battle: Calling a young, HIV-negative gay man a "Truvada whore" simply for choosing a prevention option with a higher efficacy rate than condoms. Becoming indignant when someone says AIDS is still a gay problem. Turning to the police when you find out the guy that just jilted you is HIV-positive. Putting "I'm clean, ub2" in your online profile. Joining digital stonings via online comment sections when a 20-something dares to come out as HIV-positive. HIV-negative guys barebacking with those who tell them they are negative and shunning the few brave ones who admit they're positive.

Staley analyzes this internal war among gay men, concerned that the war against HIV-related stigma is lost and can only be prevented from getting worse.

It might surprise today's younger gay men to learn that there was very little HIV-related stigma between us during the early years of the crisis. If anything, I felt the opposite of stigma when I publicly disclosed my status in the late '80s. Gay men with HIV received communal love and support. Once the gospel of safe sex was firmly entrenched, even sexual shunning became rare. Maybe it was our numbers, with upwards of half of New York's and San Francisco's gay men being HIV-positive by 1985. Maybe it was because many of us couldn't hide it, as our HIV painfully manifested as AIDS. Maybe it was our communal fighting back, as we rose up against a government that was ignoring our suffering.

Regardless of the reasons, we felt like one community. We were all living with HIV, regardless of status. I realize this view is skewed. I lived in a city where the social norms were being heavily influenced by ACT UP and other community responses to the crisis. The beginnings of gay-on-gay HIV-related stigma could be easily found in other cities and towns back then. But now it seems to be the norm, regardless of location.

In the end, after HIV is defeated, he says,

[T]here will be two kinds of people remembered: those who fought to end it, and those who slowed us down.

What do you think? Is there a way to end HIV stigma? And are there more elements contributing to stigma than the ones Staley has named?