New U.S. research on monkeys suggests that a shot injected every one to three months could replace daily pills for those taking HIV prevention medicines like Truvada, AFP reports: 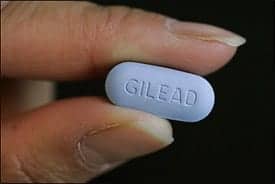 In one of the studies, conducted at the US Centers for Disease Control and Prevention (CDC), researchers gave a monthly shot of an experimental, delayed-effect antiretroviral drug called GSK744 to six female monkeys.

Twice a week they inserted into their vagina a liquid containing a human-simian immunodeficiency virus to simulate their having had intercourse with an infected male.

The drug was developed by the British pharmaceutical firm GlaxoSmithKline.

In related news, Rich Juzwiak tested out Truvada and presents his thoughts on the drug and thoughts about barebacking and safe sex in a lengthy post over at Gawker.

Juzwiak had some pretty eye-opening thoughts on how the drug affected him physically:

Unfortunately, I discovered that taking Truvada gave me too many new things to feel. Whatever short-term side effects I could get, I did. Less than a week out, I started to feel a deep sense of fatigue every day around 6 p.m. It was something I could power through and eventually shake, but it made me feel like dropping to the floor and passing out instead of going to the gym or attending movie screenings. I had perpetual muscle soreness, especially in my legs, as if I had squatted way more than I should have the day before. My skin got worse. I developed a disgusting, raised rash on my torso that my dermatologist told me was the result of a nickel allergy (I had been wearing the culprit belt for years). I was gassy.

Truvada gets compared the birth control pill a lot. To me, what it had most in common with that contraception was that it was something that was supposed to help people relax about sex, yet it made me more uptight, more self-conscious.

I was prepared to take Truvada indefinitely, though, even with the side effects, which seemed to ebb a bit as time went on. I could never be sure, too, what was a result of the Truvada and what was my body just doing bodily bullshit, or even worse, psychosomatic bullshit. Sometimes I get a zit or two for no reason, despite my daily use of a retinoid. That's life.

In that respect, the constant evaluation and causal uncertainty reminded me of the way I regarded by body before I was on Truvada, when every sneeze and cough could be a sign of illness. A-choo! (Is that HIV?) Cough, cough. (Is that HIV?) It will take a drug far stronger than Truvada to rid gay men of their body consciousness and paranoia.

The day I discontinued my Truvada use was the day I woke up with a migraine so bad that I threw up as a result of the pain, despite zero nausea. It felt like a small monster was attempting to pop itself out of my head through my right eye.