One of the longest operating gay resorts in the world, the Island House in Key West is now being put up for sale by owner Jon Allen who bought the resort (open since 1976) with partner Martin Kay in 1999. The couple invested more than $2 million in the refurbishment of the resort, but Kay passed away in 2013. Allen, for his part, still believes that the House will flourish under new management. 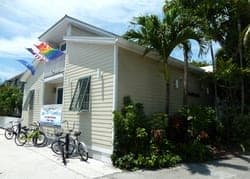 "I think I can say without boast that we created at Island House a unique place, a safe and happy space for thousands of gay men to meet, to eat and drink, to make merry. I’m proud of that, but more important in this context, Island House is successful and profitable operation. I’m confident that its new owner will operate it as a gay men’s resort. It has higher ADR’s and occupancy than any comparable property in Old Town. There’s no good reason to change its model. It’s a success," wrote Allen.

Steve Smith, outreach director for the Key West Business Guild and a friend to Allen and Kay from the time they purchased the Island House, said, "[Jon and Martin's] purchase and renovation of the Island House was a major undertaking and the end result shows through its loyal repeat guests and their dedicated employees."

Top ratings don't hurt either; the clothing-optional resort was called the "best gay resort in the world" by outtraveler.com, and its amenities, including a pool, hot tub, tanning deck, spa, and cafe/bar all help create a top notch experience. For now the resort will continue to operate as usual.