Earlier this week we reported that Catholic League bigmouth Bill Donohue was making a big deal about the fact that he was going to test the tolerance and inclusiveness of the LGBT community in response to the controversy over the St. Patrick's Day parade's exclusion of gay groups. He was going to apply to march in NYC's LGBT Pride parade. 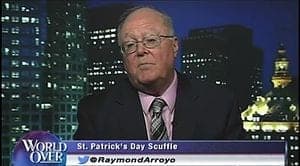 Donohue was hoping to raise a stink when he was turned down, but the parade organizers said he could march.

Donohue today announced that he was not going to march, using the sorry excuse of a mandatory "information session" as a way to weasel out of it.

For the past few days I have been engaged in an e-mail conversation with officials from the Heritage of Pride parade, New York’s annual gay event; the dialogue has been cordial. I asked to join the parade under a banner that would read, “Straight is Great.” The purpose of my request was to see just how far they would go without forcing me to abide by their rules. It didn’t take long before they did.

Today, I informed Heritage of Pride officials that I objected to their rule requiring me to attend gay training sessions, or what they call “information” sessions. “I don’t agree with your rule,” I said. They responded by saying that attendance was “mandatory.”

The St. Patrick’s Day parade has mandatory rules, too. It bars groups representing their own cause from marching, which is why pro-life Catholics—not just gays—are barred from participating under their own banner. But only gays complain: they refuse to abide by the rules. Indeed, they went into federal court seeking to force a rule change. They lost. In 1995, the U.S. Supreme Court ruled 9-0 that private parades have a First Amendment right to determine their own rules.

It is hypocritical for gay activists to complain about having to abide by the mandatory rules of the St. Patrick’s Day parade, and then inform me that I cannot march in their parade unless I respect their mandatory rules, rules that I reject. Good luck to the Heritage of Pride participants. I may be watching it from afar, but I sure won’t be downing a Guinness afterwards.

Notice how Donohue tried to embellish the requirements, first calling the information sessions some kind of "gay training" session as if we would want to recruit him.

Rich Juzwiak offered him some advice on that note:

"…as for those 'gay training sessions,' nobody wants Bill Donohue's ass and he should stop flattering himself. Take a number, buddy, it'll be in the millions."