The Oscar nominated film Her, which is in the running for Best Picture tomorrow, does a great job of picking apart some of the complexities that might present themselves in this hypothetical future scenario. Set in the near future, the film stars Theodore (Joaquin Phoenix), an introverted, but eloquent homebody who begins to develop a strong emotional bond with Samantha (voiced by Scarlet Johansson), one of the world’s first artificially intelligent operating systems.

The communication and physical barriers that Theodore must overcome in his budding relationship with Samantha is part of why the film succeeds on a dramatic and emotional level and also likely convinced many viewers that such a “long-distance” relationship could never succeed in the real, physical world. 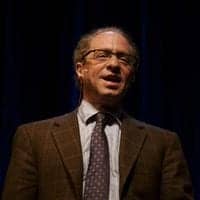 Well-known futurist Ray Kurzweil, however, dismisses this notion in his review of the film, writing:

… a lot of the dramatic tension is provided by the fact that Theodore’s love interest does not have a body. But this is an unrealistic notion. It would be technically trivial in the future to provide her a virtual visual presence to match her virtual auditory presence, using, lens-mounted displays, for example, that display images onto Theodore’s retinas

Despite the nitpick, Kurzwell praises the film as a breakthrough in cinematic futurism the same way The Matrix “presented a realistic vision that virtual reality will ultimately be as real as, well, real reality.” Kurzweil places artificially intelligent operating systems like Samantha around the year 2029, when the leap to human-level AI would be reasonably believable, a topic that I’ve touched on in a previous column.

Curiously enough, audience reaction to Her has been noticeably more subdued than the universal praise it has received from critics (cinema goers have given the film a so-so B-). Why is that? While some viewers may have been a tad uncomfortable with the film because it hit a little to close to home, others may have left the theater thinking the entire premise of a relationship with the “intangible” has no grounds in reality.

But we’ve known since the beginning of the internet that the anonymity of technology and the online world can often blur the lines between what is real and what isn’t. The film Catfish and the Manti Te’o story last year both proved that people can have lasting, emotional connections to something or someone that doesn’t have a real-world counterpart.

That steamy sexting conversation you had over Grindr the other night? For all you know, a middle-aged woman with a stockpile of carefully sculpted ab photos was trolling you that entire time.

So when it comes down to it, is it really all that much worse if it’s a computer on the other end of that conversation down the road?

But what about you? What did you think about Her and how it presented the idea of a human-AI relationship? Could you date your computer? Sound off in the comments below.

And to hold you over until the inevitable gay-themed sequel Him in 2015, check out SNL’s (somewhat) gay parody video of the movie below.