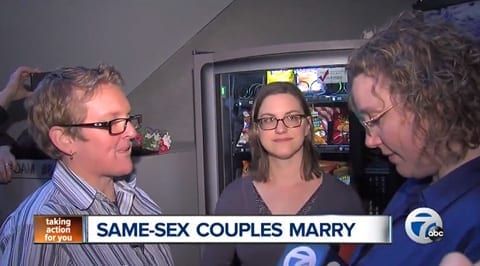 A couple marries in Washtenaw county.

A Michigan woman tells police she was assaulted after appearing on the news for her marriage to a woman in Washtenaw County, one of four counties that began marrying same-sex couples after the state's ban was struck down and before a stay was put in place.

A 28-year-old lesbian told authorities she was walking home after getting off a bus, Monday evening in Ypsilanti Township, when she was assaulted by three men — one of whom shouted,“Hey b—. Are you that f— from the news?”

The victim told Sheriff’s officials she’d been on TV talking about how she had recently married her partner in Washtenaw County.

The woman said one of the men punched her in the face, knocking her unconscious. She woke up on the ground, she said, to a second man kicking her in her stomach.

The attack happened in the parking lot of an apartment complex and three suspects are wanted:

One of the suspects is described as a white male in his mid-20s, 5 feet 10 inches to 5 feet 11 inches tall and heavy-set, with a low or husky voice. The victim could not provide a description of the other two suspects.

Anyone with information about this crime is asked to call the Washtenaw County Sheriff’s office confidential tip line at 734-973-7711 or Crime Stoppers at 1-800-SPEAK UP. Tipsters may remain anonymous.