The city council of Latina, a small commune in central Italy, has voted in favor of a motion to support the recognition of a same-sex couple’s marriage. 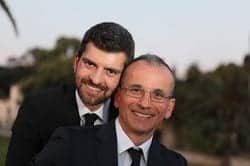 Antonio Garullo and Mario Ottocento [pictured] were the first Italian gay couple to be married more than 10 years ago in Holland. In 2004 they asked the Ufficio dello Stato Civile of the Comune of Latina to register their marriage but their application was turned down. So the couple sued theComune of Latina, but in 2005 the Tribunale of latina rejected their complaint. Then they appealed the Court decision to the Court of Appeal of Rome where they found a second denial. Eventually the couple appealed the second negative decision to the Supreme Court of Cassation. In 2012 this court rejected their appeal but delivered a landmark opinion for LGBT rights. That Court said that the Italian laws should treat gay and straight couple equally.

Antonio and Mario asked the Comune of Latina to record their marriage on April 15 and this afternoon the Council of the Latina approved in a 14-2 vote (1 absentee) a motion in support of the record of their marriage.

The motion is addressed to the Italian Government, which will decide whether or not the commune of Latina can register the marriage.