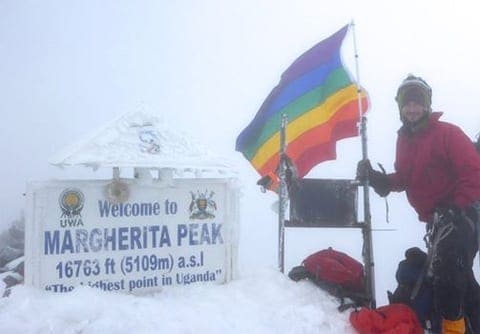 Neal Gottlieb, the owner of Three Twins Ice Cream and an activist who lives in Sausalito, California, climbed to the top of Uganda’s highest mountain, Margherita Peak, and planted a Gay Pride flag there “in protest of Uganda’s recent criminalization of homosexuality,” he wrote on Facebook. 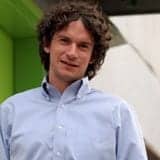 Wrote Gottlieb in an open letter to President Museveni, in part:

On April 16, 2014, after a 6-day climb, I summited your country’s tallest peak, Mount Stanley’s 16,753 foot tall Margherita Peak, and mounted a gay pride flag at its summit in protest of your country’s criminalization of homosexuality. Your country’s highest point is no longer its soil, its snow or a summit marker, but rather a gay pride flag waving brilliantly, shining down from above as a sign of protest and hope behalf of the many thousands of Ugandans that you seek to repress and the many more that understand the hideous nature of your repressive legislation…

…As the president of a nation you have the opportunity to be a great man and lead your country forward. Instead, you choose to hold your people back like the imperialists, the dictators and the warlords that have held Africa back generation after generation. The people that you wish to imprison are the same people who can help Uganda grow into a great nation.

…If you don’t like said flag on your highest peak, I urge you to climb up and take it down. However, you are an old man and surely the 6-day climb through the steep muddy bogs and up the mountain’s glaciers is well beyond your physical ability. Your days are more limited than most. Do you want your remaining days to be yet another blight on the history of your nation or will you find the strength to reverse your actions and allow all Ugandans to be free?

Previous Post: « Minneapolis Mayor, Gay Couple to Set Stage for South Dakota Marriage Challenge
Next Post: ‘The Daily Show’ Proves It Can Do the Important Stories as Well as CNN: VIDEO »