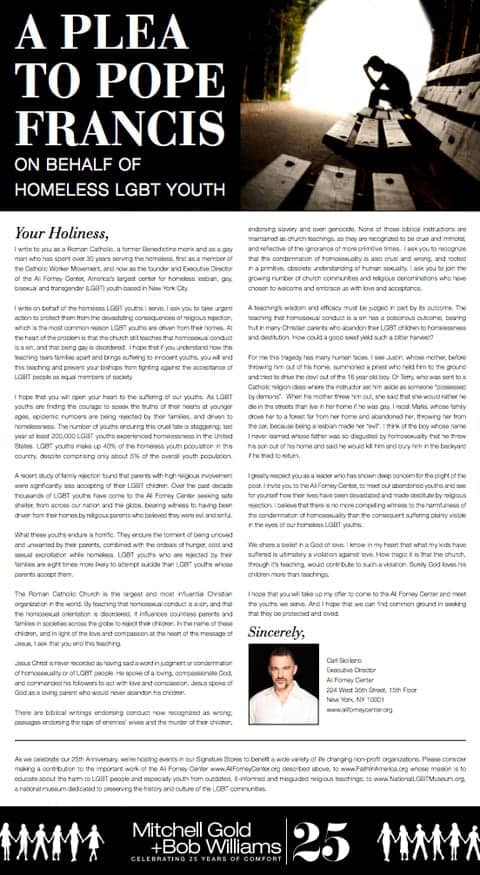 Faith in America has taken out a full-page ad in today's New York Times to make an impassioned plea to Pope Francis on behalf of homeless LGBT youth. The letter to the Pope is written by Carl Siciliano, the executive director of the Ali Forney Center, NYC's largest shelter for homeless LGBT youth. 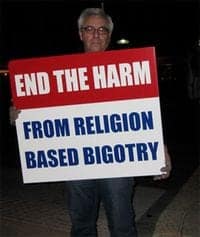 "So much has been accomplished for LGBT legal equality….now we hope the next wave will be an all-out effort for LGBT spiritual equality…one that will especially protect vulnerable teens….and one that will enable all legislation to be passed. Just imagine for a moment if so many of the kids that have killed themselves did not grow up being taught that homosexuality was sinful….if when they came out to their parents they were totally embraced rather than being told they were “disappointed” and needed counseling….if they felt they had family and church to turn to?

"I’ve come to see that in the final analysis it is this “sin” hurdle that is the basis for too many to be against LGBT equality and it is clearly one of the most harmful parts of an LGBT teen’s life. Just a few months ago a precious 13 year old in my community told me how he agonizingly contemplated suicide for over a tortuous year. Why? Because he thought he was a sinner. On a very basic, simple level I believe we must dismantle this wall of outdated, misguided and ill-informed religious teachings. Not an easy task….but one that has to be done…..by all of us, with a concerted effort."

A Facebook page was also launched to accompany the ad.