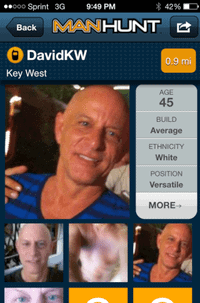 A judge in the Florida Keys said his recent decision to retire early came after a number of media outlets began posting stories and information about his Manhunt profile – a move the judge called an “inappropriate invasion of my privacy.”

Judge David Audlin announced in April that he was retiring with four years left on his term. Friday was the Monroe County chief circuit judge's last day.

A blogger found a profile for Audlin in January on Manhunt, a website that bills itself as the world's biggest gay hookup site, The Miami Herald reported. The next day a website called Above the Law posted a story about the blog.

Audlin, 56, did nothing illegal and no one has called on him to resign. But Audlin said after contemplating the matter for several months he decided to return to private practice.

"I'm looking forward to my constitutional rights being restored — my right to privacy and to be left alone in my private life," he said Friday. 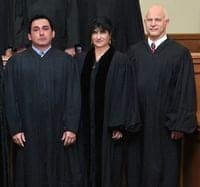 Audlin [pictured far right below] said he has never tried to hide his sexuality.

Audlin contended that a judge’s personal life should be kept off limits if it does not interfere with his ability to be a good judge, be fair to people and have a proper, professional demeanor. “I think some people look at a gay judge’s personal life as being interesting or salacious. I suppose it’s the times we live in. This whole matter has nothing to do with my service to the people or my work as a judge.”

The comments under the postings about Audlin’s profile, which included his sexual preference and size of his genitalia, were mostly negative. And while Audlin repeated that his profile was supposed to remain on the private site, he added: “I don’t think to gay people it was unusual or extreme. I guess it’s offensive to others with more conservative, religious beliefs. I get that.”

The Keys law community has had nothing but good things to say publicly about Audlin as a judge and person since he announced his retirement.

During his eight-year tenure, Audlin’s most significant decision came in 2008, when he ruled that the 1977 ban on adoption by gays and lesbians was unconstitutional.

Previous Post: « Victorious Conchita Wurst Arrives Home in Austria: VIDEO
Next Post: How to Talk to Your Kids About Michael Sam: VIDEO »