A new study reveals how the brain activity of mothers and fathers reacts to a baby's cries, and also reveals that gay fathers display brain activity which resembles that of both a mother and a father, Reuters reports: 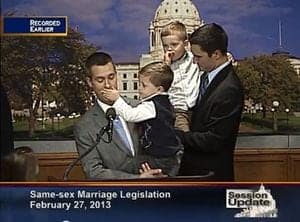 In the 20 mothers in the study, all primary caregivers, watching their babies triggered heightened activity in the brain's emotion-processing regions, particularly in a structure called the amygdala, which was five times more active than at baseline.

"These are regions that respond unconsciously to signs of an infants' needs, and that derive deep emotional reward from seeing the baby," Feldman said.

For the 21 heterosexual fathers – who were very involved in raising their baby but whose wives took the parenting lead – watching their infant increased activation of cognitive circuits, particularly a structure that interprets a baby's cries and non-verbal cues. It is the region that knows which squirm means "I'm about to scream" and which means "change me."

But studying the brain activity of gay fathers revealed an interesting pattern:

The 48 gay fathers raising children with their husbands seemed to be both mom and dad, brain-wise. Their emotional circuits were as active as those of mothers and the interpretive circuits showed the same extra activity as that of heterosexual fathers'.

More data showed that the more time a man spent as a primary caregiver, the stronger the connection between the emotional and cognitive structures of the brain. This was heightened in the gay parents.