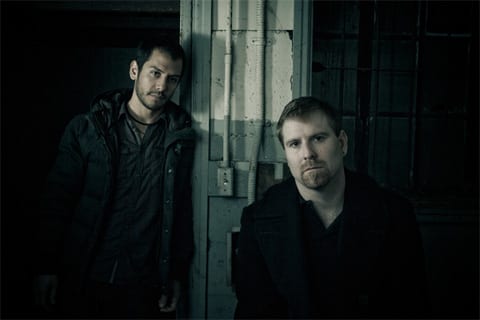 Paul Masvidal and Sean Reinert of the progressive rock band Cynic came out of the closet today in an article in the L.A. Times:

…there's one thing that Masvidal and Reinert have stayed quiet about in their public lives, until now.

Both men are gay and stars in a music scene where bands can wear corpse-paint makeup and leather S&M garb while singing about Satan and dismemberment — yet genuinely nonconforming sexuality hasn't always been welcome.

Though they've been comfortably out for years in their private lives, the two haven't yet spoken about their sexuality in the context of their music.

As artists, they've pushed the edges of heavy metal music for most of their lives. Now they're ready to challenge old stereotypes about sexuality in one of music's most aggressively masculine genres.

The two came out at separate times, one before the other:

Masvidal had come out to friends and family in 1991, and later began exploring drag bars and gay nightclubs while on tour. Reinert a bit took longer to come out. (And, they stress, they've never been attracted to each other.)

"I knew that, secretly, I wanted to go to those clubs too," Reinert, 42, said. "But back then, my stereotype of how to be gay was wearing dresses and tank tops. I didn't have any masculine, metal role models who were gay."

Previous Post: « Towleroad Guide to the Tube #1575
Next Post: Who is the Most Famous Person Sean Hayes Can Get on His Phone? — VIDEO »