Storme DeLarverie, a 93-year-old veteran activist who took part in the 1969 Stonewall uprising, died on Saturday morning in her sleep.L 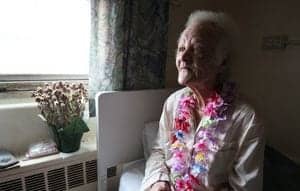 The New York Times did a powerful story on her four years ago. You can read it here.

"The woman in Room 609, Storme DeLarverie, has dementia. She is but one anonymous elderly New Yorker in a city with thousands upon thousands of them. And many of those who marched down Fifth Avenue on Sunday would be hard pressed to realize that this little old lady — once the cross-dressing M.C. of a group of drag-queen performers, once a fiercely protective (and pistol-packing) bouncer in the city’s lesbian bars — was one of the reasons they were marching."

I also posted about DeLarverie back in 2009 when she was facing eviction from her apartment in NYC's Chelsea Hotel.

Here is her page on the Stonewall Veterans' Association website. 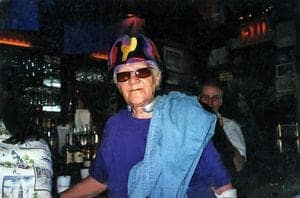 The Bronx LGBTQ Center sent out this remembrance of DeLarverie:

The Bronx LGBTQ Center is deeply saddened by the loss of a pioneer of the modern-day LGBTQ civil rights movement, Stormé Delarverie. Often referred to as the "Rosa Parks" as the gay rights movement, Stormé was a fierce woman who stood up for our community on countless occasions. She passed away peacefully in her sleep on the morning of Saturday, May 24, 2014.

Stormé was an amazing and warm individual who spent her life taking care of people. It didn't matter if they were lesbian, gay, straight, young, old, transgender, questioning, bisexual, Black, White, Latino — she treated everyone with the same warmth, compassion, kindness, conviction, courage, strength of spirit, and love. This led her to be dubbed the unofficial mother of our community, especially by those who knew her.

She was not someone who tolerated injustice, though she faced it on an almost daily basis throughout much of her life. Stormé was a Black lesbian who often presented as a Black man, although she could easily have passed for a White woman — she choose not to do so. Her love of people made Stormé an advocate, and she stood up to all injustice whenever she encountered or heard about it.

It was this conviction that led her to change the world for all of us, for the better. Stormé is credited as having thrown on of the first punches during the Stonewall Uprising in June, 1969. But it was her ongoing effort throughout decades of caring for our community that most people who knew her, remember her.

A celebration of her life and immeasurable contributions to the modern Gay Civil Rights Movement will be held on Thursday, May 29th from 7-9pm at the Greenwich Village Funeral Home, 199 Bleecker Street (@ 6th Avenue), New York, NY. All are welcomed to honor this woman who forever changed our lives and helped launch the movement that will bring us equality.

Thank you Storme, and rest in peace.