The temporary stop to gay adoptions was issued by the court on Friday. The AP reports: 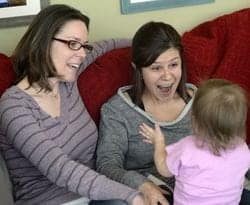 The stay was granted Friday night in response to a Utah Attorney General's Office request for clarity on whether the department can issue the birth certificates if directed by court order.

The attorney general's office praised the decision, saying the stay will remain in effect until the issue has been resolved by the court. The court has not yet announced a date for oral arguments.

The stay was issued a day after the Attorney General's office was ordered to appear in court for their refusal to issue birth certificates to adopted children with same-sex parents. According to the Salt Lake Tribute:

A state court judge this week ordered that the Utah Attorney General’s Office and several government agencies appear in court on June 16 to explain why they have refused to honor these adoptions.

If they refuse, or provide an inadequate response, Attorney General Sean Reyes, Executive Director of the Utah Department of Health, W. David Patton, and the State Registrar of the Office of Vital Records, Janice Houston, may be held in contempt of court — a crime punishable by incarceration, a fine or both.

"[These officials] must appear and show cause why they should not be held in contempt for their willful disregard and refusal to obey the Decree of Step-Parent Adoption," wrote 3rd District Judge Andrew Stone.

The AG's office issued a statement in response to the stay. It reads in part:

"The stay prevents further confusion as the district court order required the (health) department to list same-sex parents as the legal parents of an adoptive child. The department sought clarification because the court orders appear to conflict with Utah law currently in effect, which prohibits the state and any state entities from recognizing same-sex marriages."