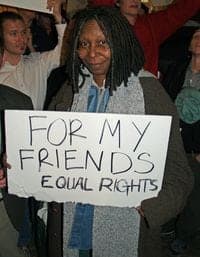 In an interview with Between the Lines News, comedian-actress Whoopi Goldberg reflected on her longstanding relationship with the LGBT community, saying that in her early career “nobody wanted me but the gay community.”

Goldberg also addressed the public’s longstanding speculation about her sexuality:

…it's like, there are a lot worse things people could have accused me of – things that would really be upsetting! [Questions about my sexuality are] not one of them. It never has been. I grew up in the theater. I grew up in a neighborhood where there was always gay folks. Always! So I never understood people's freak out about it. Everybody is so damn paranoid about everything. They're so concerned that (people) are gonna be like, "Oh, somebody's gonna think I'm gay." So what! What happens if they do?

Ultimately, Goldberg said that because she was an early ally for the LGBT community many people just automatically assumed she was gay herself:

It was ridiculous. I was like, "Uh, no." People just didn't understand. You see bad situations or stupid situations, like folks having an issue with who you cared about, who you wanna be with, all that kind of stuff that has nothing to do with the realities of our world. The realities of the world I grew up in was: It was nobody's business. If you're not doing your job, then I'm gonna bitch. But I'm not gonna bitch at anybody 'cause they're gay, or because they weigh a lot more than me. At the time, it just seemed so stupid to me that this was what people's issues were.