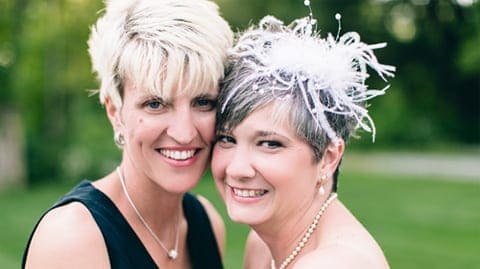 The ACLU and the ACLU of Alabama filed a lawsuit today in the U.S. District Court in Birmingham on behalf of  April and Ginger Aaron-Brush who were wed in Massachusetts but want their marriage recognized in their home state.

Said April Aaron-Brush in a press release: “The word marriage, in itself, brings validity and respect to any committed relationship. One's marriage status shouldn't change simply by crossing state lines. Gay couples seek to be married for the very same reasons that opposite-sex couples choose to be married– love, honor and commitment.”

Said Susan Watson of the ACLU of Alabama: “All loving and committed couples deserve the dignity and protections that come with marriage, no matter where they live,” “It’s time for marriage equality to come to Alabama.”

Here is the ACLU's page on the case.

The ACLU is currently litigating for marriage equality in 13 states.

There is another case challenging Alabama's ban on gay marriage which was filed by the Southern Poverty Law Center in February which seeks to overturn the ban and seeks recognition of same-sex marriages performed elsewhere.