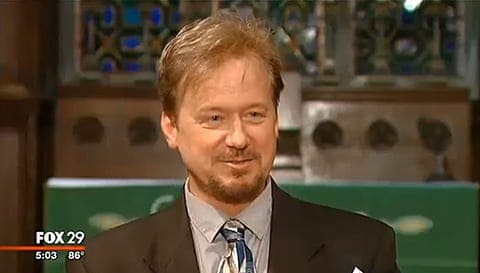 Methodist pastor Frank Schaefer, who was defrocked last year for officiating at his son Tim’s gay wedding in 2007, has been reinstated after winning an appeal.

Until his defrocking, Mr Schaefer had been the pastor of Zion United Methodist Church of Iona in Lebanon, Pennsylvania.

A United Methodist Church appeals committee deemed the defrocking of Schaefer, who is the father of three gay children, to be an illegitimate effort to punish the pastor for his refusal to promise not to preside at another same-sex wedding.

Although the appeals panel did not question Mr. Schaefer’s guilt and upheld a 30-day suspension as punishment for violations of church law, it ruled that defrocking was wrong because “clergy can only be punished for what they have been convicted of doing in the past, not for what they may or may not do in the future.” The panel also decided that Schaefer should get back pay dating to when the suspension ended in December.

Speaking to The New York Times, Schaefer said that the committee’s decision sends a clear message that “change is on the way.”

“I can't even begin to describe how meaningful this "refrocking" is to me. I never did understand the severity of my punishment for an act of love for my son Tim. The committee of appeals understood that my defrocking sought to penalize me not for what I did but for what I might do in the future.”

However, according to Reverend Rob Renfroe, president of Good News, a United Methodist organization that opposes gay marriage:

“When we have people who are not only disobedient, but who find a way to not have to keep the covenant they have made with the rest of the church, it helps us see that maybe we are so different that we’ve come to the end of the road together.”

Watch Schaefer speak about his reinstatement, AFTER THE JUMP…