Today in a 6-3 decision the Supreme Court has ruled against Aereo in favor a consortium of major broadcasting companies who initially brought suit against the New York-based start up in March of 2012. 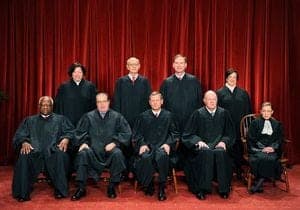 Aereo's service allowed subscribers to stream local broadcasts from markets not their own through a series of rented antennae. Current available in select markets, the service circumvented traditional broadcasting methods, allowing subscribers to watch local television via the internet. Aereo also avoided paying substantial the retransmission consent fees that make up a sizable chunk of broadcasting revenue.

The National Football League and Major League Baseball filed an amicus brief last fall, warning that public sports broadcasting would shift to cable broadcasts, a threat that would likely be mirrored by other popular forms of broadcasting. Despite its clever workaround, the Court's held that Aereo did not, in fact, operate "simply as an equipment provider," which had been the company's primary defense.

Rather, Aereo acted as a cable tv company and thus was in violation of the Cable Television Consumer Protection and Competition Act. "[This is] a massive setback for the American consumer," said Aereo CEO Chet Kenojia. "We,ve said all along that we worked diligently to create a technology that complies with the law, but today's decision clearly states that how the technology works does not matter."

Barry Diller, whose company IAC funded Aereo to the tune of $20.5 million, told CNBC: "We did try, but it's over now."