Bryan John Ellicott sued the city of New York this week, claiming that Parks Department employees discriminated against him, violating his civil rights when they told him to use the women's locker room at Lyons Pool on Staten Island, or leave, the NY Daily News reports: 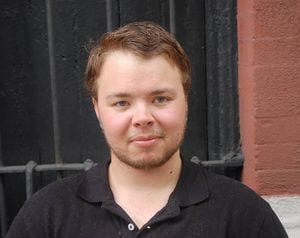 The 24-year-old is currently transitioning from female-to-male, according to a lawsuit filed in Manhattan Supreme Court. Ellicott takes hormone replacements but hasn’t had sex-reassignment surgery yet, the suit said. He wore a t-shirt at the pool to cover up the binder he wears to compress his chest, the lawsuit said. But it wasn’t discreet enough to keep Parks Dept. employees from ordering him out, the suit claimed.

“You need to leave … someone complained about someone being in the locker room who doesn’t belong here,” a Parks Dept. worker identified as Employee No. 1 told Ellicott, according to the suit.

Ellicott is idenitifed as male on his driver's license. He is also a city employee, working for the Office of Emergency Management.

The city has not commented on the suit, adds the NYDN:

The Parks Dept. declined to answer questions about its policies on public pool bathroom and facility usage. It referred all questions to the Law Dept.

“We will review the lawsuit when we are served,” a spokesman for the Law Dept. said Monday.

Ellicott, who chose his male name in honor of his father, a 9/11 first responder and city Emergency Medical Technician, is asking for unspecified damages.

He also wants to enjoin the Parks Dept. from future discrimination against transgender individuals seeking to use public facilities, the suit said.

Previous Post: « The OXD Mirror: A Dose of Pop-Infused Tunes For Early Summer
Next Post: ‘How It Got Better’ for Jason Collins: VIDEO »