Noted young earth creationist, homophobe, and opposer of the Local Law Enforcement Hate Crimes Prevention Act of 2007 Janet Porter is building the Reagan-themed social network that the country has been clamoring for. 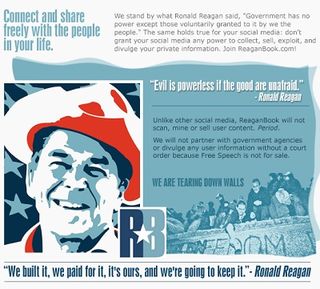 One might think that creating the infrastructure to sustain a social network would be a daunting task requiring an impressive amount of technical knowhow and coding skills. One would be wrong. Reaganbook’s current “About Us” and “Policy” pages are still populated with lorem ipsum dummy text, and the beginnings of what seems to be a grocery list, respectively. Still though, the site currently boasts a growing userbase of over 1400 people, and fun quizzes such as: Who Said It: “Reagan or Hitler?”

“It’s the e-mail, it’s the Facebook for patriots.” Porter explained to a crowd at the Ohio Liberty Coalition’s Reload 4 Liberty event. “We’re tearing down walls. Get it?”

We totally get it. Registration is open to the public and will absolutely, positively in no way, shape, or form lead to inbox spam.

UPDATE: Since the original posting of this piece Reaganbook's management has put the entire site into "offline mode" and released the following statement:

"Thank you to all those who participated in the pre-release of ReaganBook.com Your participation is helping us build a more secure site. Thank you! Please be patient while we make the necessary changes to keep the site free from obscenity, pornography, and those intent on the destruction of life, liberty, and the family. We will be opening the doors again soon with additional protections in place. As Reagan taught us, trust, but verify."

Watch a clip of Janet Porter pitching the digital performance art piece that is Reaganbook,
AFTER THE JUMP…