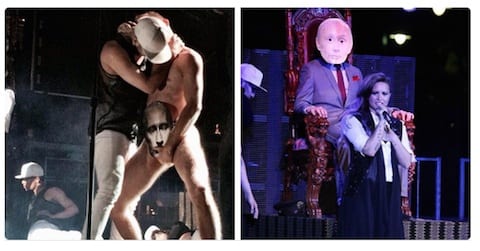 Russian social media users have taken to Twitter following Demi Lovato’s concert at New York Gay Pride which featured a strategically placed image of Vladimir Putin, according to the BBC.

During a performance of "Really Don't Care", two of Lovato’s male backing dancers shared a kiss. One of dancers was naked except for a portrait of Vladimir Putin attached to his underwear.

Russia has come under fire in the last year for enacting anti-gay laws.

The video for "Really Don't Care" features scenes from a gay pride event in California and opens with Lovato saying, "You don't have to hate because my Jesus loves all."

Fans have also taken to Twitter to defend Lovato.

Some fans have since voiced concerns that Lovato will not be allowed to perform in Russia in the future.

Watch the video for "Really Don't Care," AFTER THE JUMP…