The Supreme Court's decision in Burwell v. Hobby Lobby Stores, Inc. could pose a significant threat to the fight for broader access to comprehensive treatment for HIV/AIDS. The ruling, handed down last week, held that closely held, for-profit corporations could be exempt from laws in direct conflict with their religious beliefs. 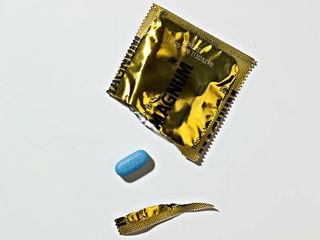 Hobby Lobby took specific issue with four forms of contraception the Affordable Care Act required it to provide its employees through its healthcare. While the bulk of the Hobby Lobby conversation has centered around religious objections to contraceptives, Media Matters points out that similar arguments could be made against Truvada, a drug just as socially polarizing.

A form of pre-exposure prophylaxis, (PrEP) Truvada has proven itself to be an overwhelmingly effective means of blocking HIV infection when taken properly. With a 99% efficacy rate, an endorsement from the CDC, and increasing deployment in public health initiatives, Truvada has the potential to be a key component in halting new HIV infection rates.

As Carlos Maza points out in Media Matters, however, the conversation around Truvada bears a striking resemblance to the debate about birth control. "[T]he Truvada debate recalls the way birth control was viewed in some quarters in the 1960s — as an accessory to promiscuity."

Previous Post: « Ian Thorpe is About to Be Asked for the Nth Time if He’s Gay: VIDEO
Next Post: The Most Shocking Thing Bill O’Reilly Can Find at the SF Pride Parade are Drag Queens Who Love Bill O’Reilly: VIDEO »