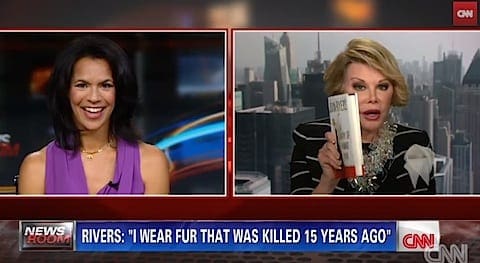 Joan Rivers released a statement to CNN on Saturday in response to anger over her remarks last week calling Michelle Obama a "tranny".

"I think it's a compliment. She's so attractive, tall, with a beautiful body, great face, does great makeup. Take a look and go back to La Cage Au Follies (sic). The most gorgeous women are transgender. Stop it already … and if you want to talk about 'politically correct,' I think this is a 'politically incorrect' attack on me because I'm old, Jewish, a woman and a 'hetty' — a heteosexual … and I plan to sue the reporter who, when he turned off his camera, tried to touch me inappropriately on the a** – luckily he hit my ankle. Read the book … if you think that's silly, wait to (sic) you see what I say about FDR and Eleanor!"

Rivers also told TheWrap that she is not sorry for walking out on CNN anchor Fredricka Whitfield:

“The CNN interviewer was a news reporter and not an entertainment reporter. She did not seem to understand we were talking about a comedy book and not the transcripts from the Nuremburg Trial. Every question was an accusatory one designed to put me on the defensive.”