Members of the Lebanon police force’s “Moral Protection Bureau” alleged to be carrying out physical tests on men suspected to be homosexual, according to the Independent. 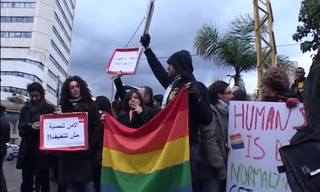 While homosexuality remains illegal in Lebanon, the physical testing practices suspected of being used are considered a form of torture, and are illegal. A doctor, hired by the police to investigate the sexualities of five Lebanese and Syrian men, is said to have conducted the “test” at the authority's behest.

“We are asking the Order of Physicians to sue him [the doctor] for professional misconduct,” attorney Saghieh told The Daily Star, expressing concern that there were more unreported cases. “There are many sanctions available, so it is up to the people who are hearing this case to decide on what is adequate.”

Previous Post: « Malaysian Airliner with 295 Aboard Crashes in Ukraine; Interfax Says Plane Was Shot Down
Next Post: Alaskan Seaplane Has a Close Encounter With a Surfacing Whale: VIDEO »