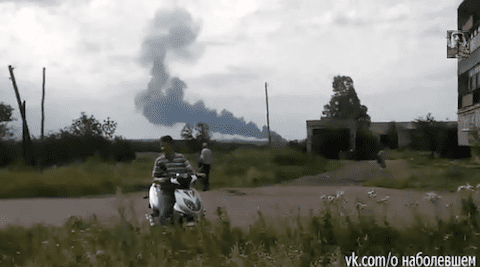 Reuters reports that Interfax says the jet was shot down at an altitude of 10 km (33,000 feet).

#BREAKING: Malaysian plane was brought down by a ground-to-air missile: Interior Ministry adviser, quoted by Interfax

Interfax news agency has quoted leaders of the self-declared Donetsk people's republic denying that the rebels shot down the Malaysian airlines plane. A reported member of the republic's security council said the rebels only have weapons able to shoot down a plane at 3,000 metres and blamed Ukrainian military forces for the attack. (The plane was reportedly flying at 10,000 metres).

But officials from Ukraine's defence ministry and national security council said the rebels have Buk surface-to-air missiles able to shoot down planes at such elevations and suggested one was used in the attack.

Info on the Buk missile launcher, developed by the former Soviet Union, here.

There are reports that 23 U.S. citizens were aboard the plane.