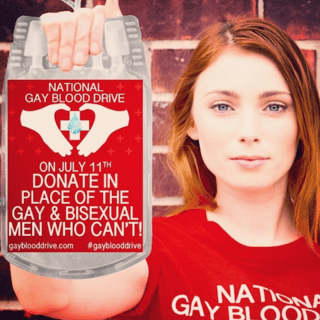 Filmmaker and activist  Ryan James Yezak has organized the second annual National Gay Blood Drive, scheduled to take place this Friday. Yezak first became interested in creating the drive after being denied the opportunity to speak to to the Food and Drug Administration about the ban on blood donated by men who have sex with other men for his upcoming documentary Second Class Citizens.

“The ban perpetuates inaccurate stereotypes and a negative stigma about the gay male population.” Yezak said in a press release. “The policy is outdated, and as a result, otherwise eligible gay and bisexual men are unable to contribute to the nation’s blood supply and help save lives.”

Despite last year’s blood drive focused on drawing support from gay and bisexual male communities Yezak was surprised to see overwhelming support from lesbians and heterosexual allies alike. Inspired, he’s decided to expand the Gay Blood Drive’s presence into 60 cities around the country this year:

“This year, the drive’s goal is to get everyone involved – including our ally donors – to speak with a collective voice. Eligible allies can donate in place of the gay and bisexual men who cannot so that we not only raise awareness about the ban but also help contribute to the more than 41,000 blood donations needed every day.”